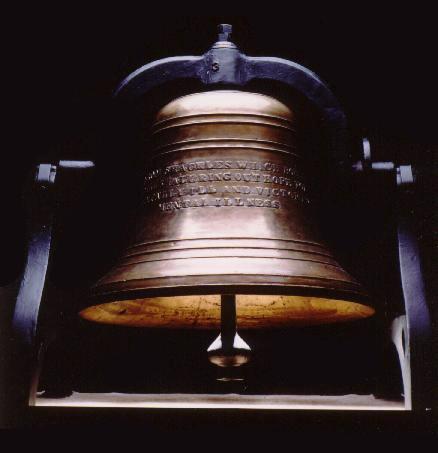 Cast from shackles which bound them, this bell shall
ring out hope for the mentally ill and victory
over mental illness. (Inscription on NMHA Bell)

During the early days of mental health treatment, asylums often restrained persons with mental illnesses by iron chains and shackles around their ankles and wrists. With better understanding and treatments, this cruel practice eventually stopped.

In the early 1950s, the National Mental Health Association (NMHA) issued a call to asylums across the country for their discarded chains and shackles. On April 13, 1953, at the McShane Bell Foundry in Baltimore, MD, NMHA melted down these inhumane bindings and recast them into a sign of hope: the Mental Health Bell.

Now the symbol of NMHA, the 300-pound Bell serves as a powerful reminder that the invisible chains of misunderstanding and discrimination continue to bind people with mental illnesses. Today, the Mental Health Bell rings out hope for improving mental health and achieving victory over mental illnesses.

Over the years, national mental health leaders and other prominent individuals have rung the Bell to mark the continued progress in the fight for victory over mental illnesses.